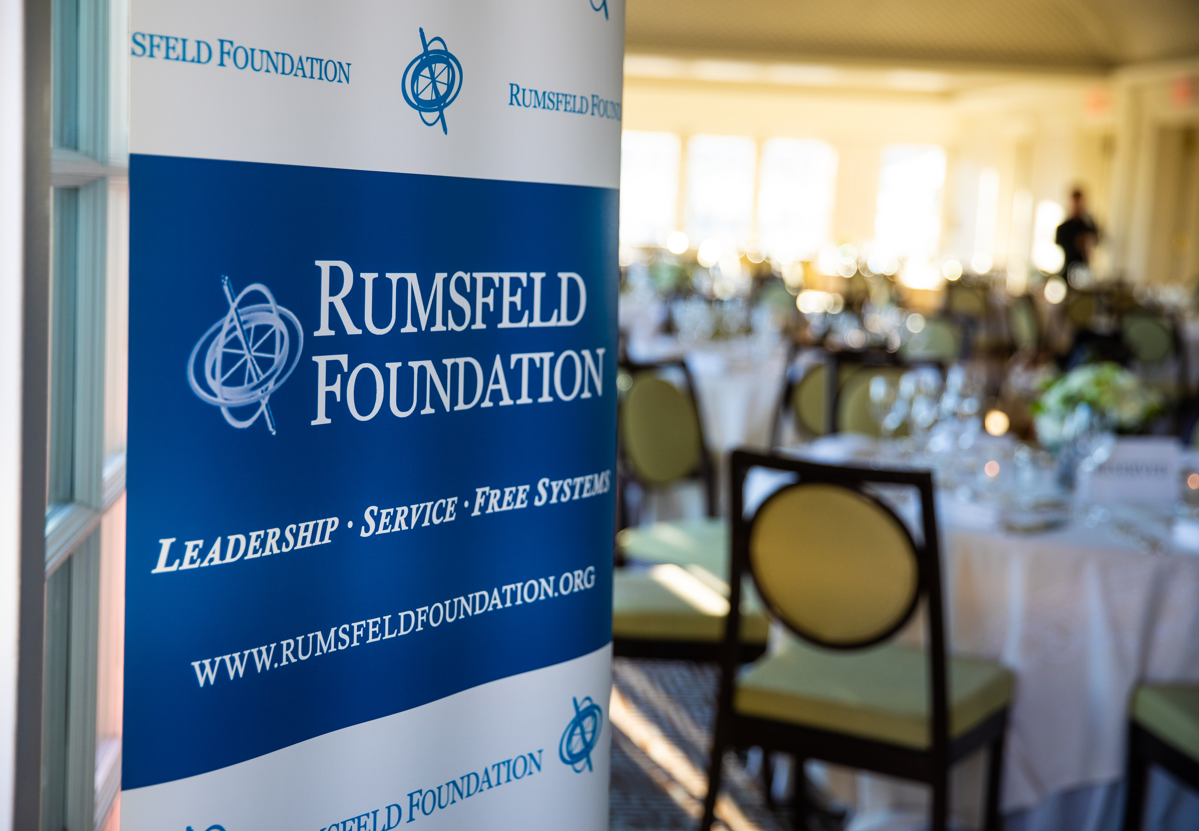 Washington, D.C. – On September 23rd-24th the Rumsfeld Foundation hosted its ninth annual Graduate Fellowship Conference in Washington, D.C. with network members attending from across the country.

This year’s conference also served as a commemoration of Secretary Rumsfeld’s legacy and vision for encouraging the next generation of America’s public service leaders. Touching on that vision, in a welcoming letter to attendees on behalf of the Foundation’s leadership, Victoria Clarke, Board President, wrote, “We are proud to have witnessed all of your terrific accomplishments to date and hope that moving forward each of you will join us in working together towards Secretary Rumsfeld’s long-term vision for our Fellowship Network: to continue to foster a vibrant and engaged public service-oriented community, connected and driven by mutually beneficial interests and opportunities among its growing number of members.”

The conference began Thursday evening with a welcoming reception at the Mayflower Hotel where Fellows and Advisers had the opportunity to connect before Friday’s full day of events.

Formal conference sessions commenced the following morning at the Park Hyatt with welcoming remarks from Sarah Tonucci, Executive Director; Victoria Clarke, Board President; and Theresa Campobasso, Graduate Fellowship Alumni Network Member, who welcomed participants and shared reflections on Secretary Rumsfeld’s legacy and the program’s impact and development over the years.

The ensuing conversations throughout the day focused on a broad theme of addressing current and future challenges facing the nation and discussing timely topics including the recent 20th anniversary of September 11th.

Following opening remarks, Robert Zoellick, Senior Counsel at Brunswick Geopolitical and former World Bank President, U.S. Trade Representative and Deputy U.S. Secretary of State, shared perspectives from his latest book on the history of U.S. diplomacy as well as from his seasoned career. After Zoellick’s remarks, Fellows and Advisers participated in interactive Network Roundtables focused on addressing future challenges across issues like U.S.-China relations, the balance of hard and soft power in U.S. foreign policy, and civil discourse in academia. Roundtables were led by internal network members − program Advisers and experienced Fellowship alumni − with relevant experience and expertise.

After informal discussions over lunch, Fellows and Advisers had an opportunity to further discuss mutual interests and areas for collaboration in a “Building Network Connections” session.

To follow, the afternoon’s “Expert Speaker Series” featured talented professionals tapped for their subject-matter expertise and relevant career experiences. Speakers included Lisa Curtis, Director of the Indo-Pacific Security Program at CNAS and former Deputy Assistant to the President and NSC Senior Director for South and Central Asia, who spoke on the U.S.’ withdrawal from Afghanistan; Robert Doar, President of the American Enterprise Institute, who spoke on innovation in think tanks; and Craig Froelich, Chief Information Security Officer at Bank of America, who spoke on cybersecurity.

The day’s sessions concluded with a panel on “The Legacy and Lessons of September 11th” during which attendees had the opportunity to reflect on the 20th anniversary of September 11th and hear from friends and colleagues of Secretary Rumsfeld who shared insights from their experience in the Pentagon during the wake of 9/11 and beyond. Panelists included Victoria Clarke, Board President; Lawrence Di Rita, Greater Washington D.C. Market President for Bank of America and Foundation Board Member; Admiral Edmund Giambastiani, Board Member at Boeing and former Vice Chairman of the U.S. Joint Chiefs of Staff and NATO Supreme Allied Commander Transformation; and Jamie McIntyre, Washington Examiner Senior Writer, Defense and National Security.

After further networking and conversation over coffee, the conference concluded as participants gathered for a formal reception and dinner at the Top of the Hay-Adams with views overlooking the White House. Ms. Tonucci and Ms. Clarke shared final closing remarks thanking all who attended and encouraging their continued engagement in the program and network moving forward.

Through the Graduate Fellowship Program the Foundation has provided a total of more than $3.5 million in grants to 178 graduate scholars with an interest in public service and hosted over 40 events for the Fellowship Network since 2008.